He was born in 1957 and spent his early years in the city of Covilhã. At the age of 18 he went to Coimbra, where he earned a degree in civil engineering. He received an MBA in 2005 from the Lisbon University Institute. 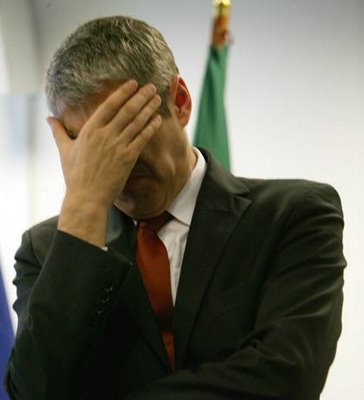 José Sócrates was one of the founders of the youth branch of the Portuguese Social Democratic Party before changing his political affiliation and joining the Portuguese Socialist Party in 1981. He was a technical engineer for the Covilhã city council and has been elected a member of the Portuguese parliament since 1987. He served as spokesperson on environmental affairs for the Socialist Party from 1991 to 1995. In 1995, he entered government as secretary of state for the environment. Two years later, Sócrates became minister for youth and sports and was one of the organizers of the EURO 2004 cup in Portugal. He became minister for environment and territorial planning in 1999. Following the elections of 2002, Sócrates became a member of the opposition in the Portuguese parliament. In 2004, he became secretary-general of the Socialist Party. After the victory of his party in the 2005 Portuguese election, Sócrates was called on to form a new government. He was elected for a second term as prime minister in September 2009.

Portugal has made dramatic changes in its energy policy over the last five years under the government of Prime Minister Sócrates. The country's installed renewable energy capacity more than tripled between 2004 and 2009 and renewable energy sources now represent roughly thirty-six percent of electricity consumed. Thanks to this performance, Portugal currently ranks fourth in Europe in energy production from renewables.

Under Prime Minister Sócrates, the government has tried to create new rules and implement reforms aimed to improve efficiency and rationalize resource allocation in the public sector, fight civil servant overcapacity, and reduce bureaucracy, but the country's public debt and deficit, as well as high unemployment, remain problems.

This spring, Portugal joined the five European countries that have already legalized same-sex marriage: Netherlands, Belgium, Spain, Norway, and Sweden. France and Denmark recognize same-sex unions, which convey many but not all of the rights enjoyed by married couples.